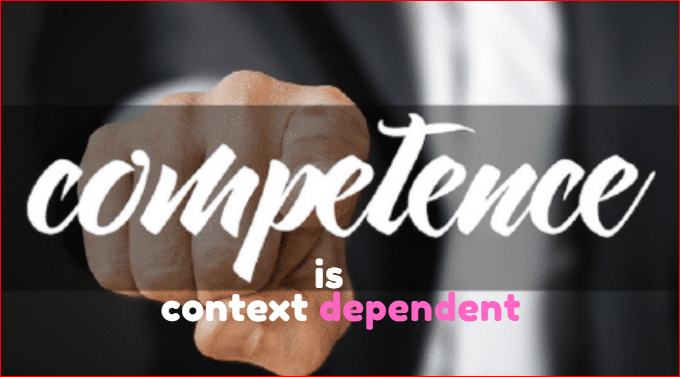 A designer at startup will have limited resources and even less time. They’ll be required to “ship fast” because the clock is ticking and everything is an experiment. Management will have a relatively high tolerance for mistakes, and decisions will be made on the spot.

Conversely, a large accounting firm will be far less tolerant of risk; decisions are made by the committee; perfection will be prioritized over speed and autonomy will likely be also low.

How similar do these roles sound now?

The same, but different.

While the fundamental craft is essentially the same, the context is entirely different. Success is measured differently, and the respective operating environments have very little in common.

This means that competence is dependent on context, something that James Clear emphasizes in his book Atomic Habits.

This is a departure from the way many companies, and indeed many talent acquisition professionals, think about competency frameworks. It’s easy to associate competence with job titles in a generic sense. However, given people’s performance will depend on the context in which they operate, all notions of competence should take context into account.

How to build context into your recruitment process

When filling a role, it’s important to think of what it takes to be successful in that role at your company. It’s helpful to divide the requirements into two components. The first is the skills that are specific to the role itself and would likely be required in any context. In other words, what does the person in the role need to achieve? The second component is the skills that are unique to your context. In other words, how do you expect the person to approach their role? This can include cultural aspects, attitude, behavior and so on.

The next step is to come up with a way to test candidates for those skills. Following this logic, a generic “graphic designer test” doesn’t make much sense because it only addresses the first component. In order to identify someone who will excel in a role in your context, the test must take into account both components. It must be context-dependent because competence is dependent on context.

Thinking about candidate selection in this way will help you identify people who are more likely to be successful in your environment. This makes sense because it’s also unlikely that the people who want to work at a startup will also want to work at major accounting firms, and vise-a-versa.

Making hiring about merit, not background | Co-founder and CEO of Vervoe